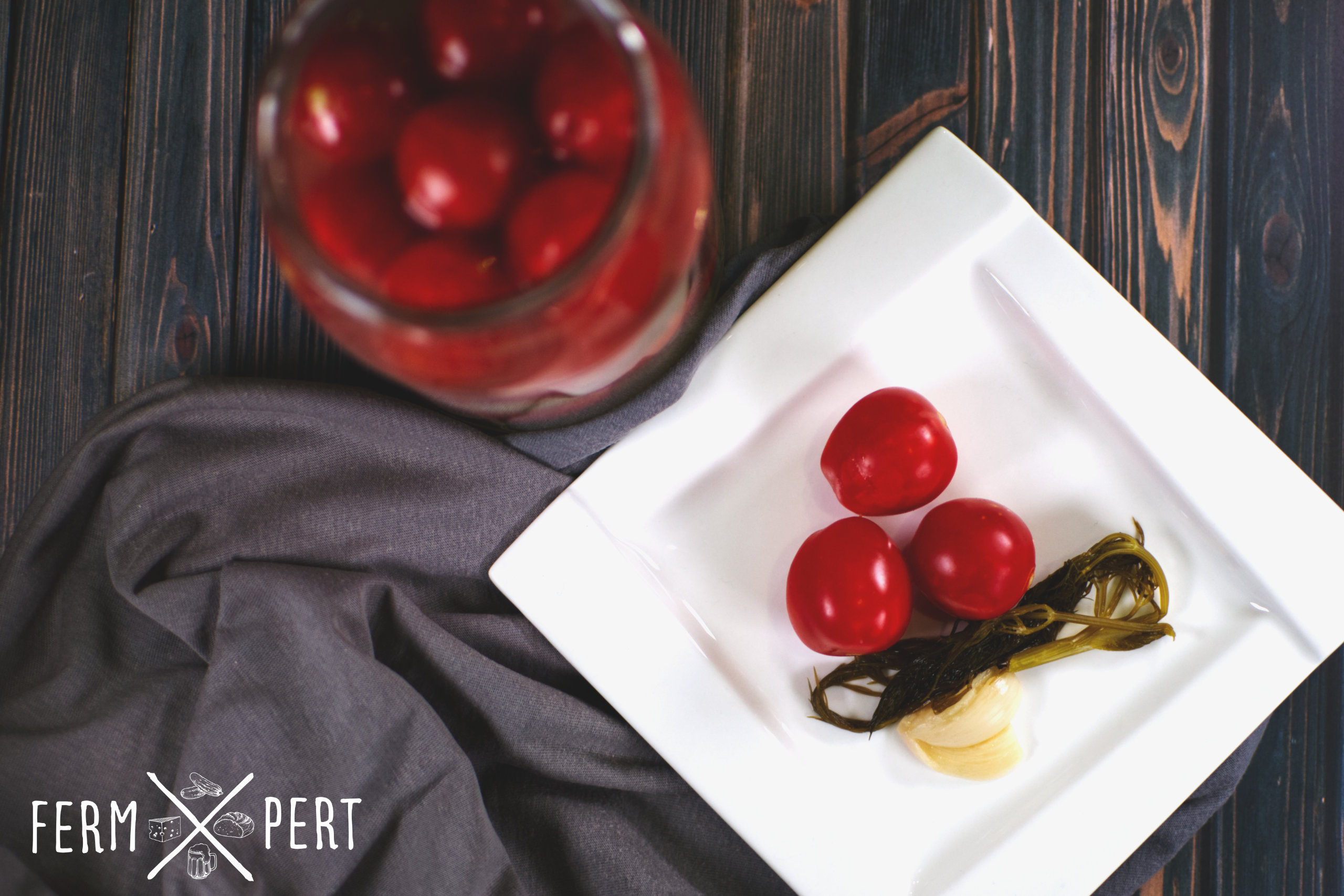 The culinary culture of Eastern Europe is rich in fermented vegetables. One of the more popular examples are fermented tomatoes. Below, I present an improvised recipe. It’s not a traditional way to ferment tomatoes, but it certainly is yummy.

Wash the tomatoes and the dill, peel the garlic and lightly crush it. Place in a 900 ml/1 qt jar in layers, minding that the dill and the garlic are distributed throughout the jar’s volume. Use a fermentation weight if possible. Top with the brine until all the vegetables are submerged and have no contact with air. Screw the lid on loosely.

Keep the tomatoes at room temperature. They’re ready for consumption after two weeks. After this time the jar can be placed in the fridge.

Fermenting tomatoes is common in Eastern Europe, but not necessarily in my country. There are multiple recipes available, with numerous differences in terms of ingredients. I decided to improvise and make my own tomatoes. The recipe can be found on the blog.

The tomatoes I’m going to use aren’t at all traditional: I’ll use cherry tomatoes. The remaining ingredients are the same as in half sour gherkins: dill, garlic, salt and water. Here I’m using dill leaves, but I’ve also tried with dill flowers and the results are just as good. I don’t use any additional spices or herbs.

I begin by preparing the brine. I add the salt to water and stir until it’s dissolved. Since I’m using room temperature water, stirring takes a little while.

Next, I prepare the garlic. I peel a bulb and extract a few cloves from it. I give them a light crush with a knife, slice off the root ends and remove the peels. I crush them a bit harder so that they give off more aroma when they’re in the brine.

The brine goes into the jar. I pour it so that it completely covers all ingredients. The brine level is high, but I’ve noticed that it doesn’t rise as much as in other ferments. The carbon dioxide bubbles are able to rise freely, so there’s a lower probability of leakage. I screw the lid on loosely so that carbon dioxide can escape without problems.

This is what my tomatoes look like prior to fermentation. They’ll remain at room temperature for two weeks.

The bacteria present in vegetables will thrive and colonise the environment in the brine in a few phases. Leuconostoc mesenteroides is the first of the dominant strains. When the concentration of acid produced by these bacteria becomes too high, Lactobacillus brevis, a strain more resilient to low pH, takes over. The last dominant strain is Lactiplantibacillus plantarum, which can withstand pH values as low as 3.2.

Tomatoes contain around 3% of simple sugars, approximately equal amounts of glucose and fructose. Both sugars are digested by lactic acid bacteria, with the products of their digestion being mainly lactic acid and carbon dioxide. An interesting phenomenon in fermented tomatoes is that part of the carbon dioxide remains inside the fruit, resulting in a slight fizziness.

After two weeks, my tomatoes look like this. The brine is visibly cloudy and on the tomatoes, there’s some whitish sediment of lactic acid bacteria. It’s time to open the jar and have a taste of what’s inside.

The brine’s surface is free of mould or wild yeast growth. In the aroma there’s nothing surprising: there’s a hint of tomatoes crossed with half sour gherkins. It’s fresh and pleasant.

When I bite into the tomato, the fun begins. The skin is slightly tough, but the flesh is incredible. It’s slightly sweet, with hints of dill and garlic, but above all, it’s fizzy. Tomatoes like this are a great side to sandwiches or a tasty appetiser. Yum!