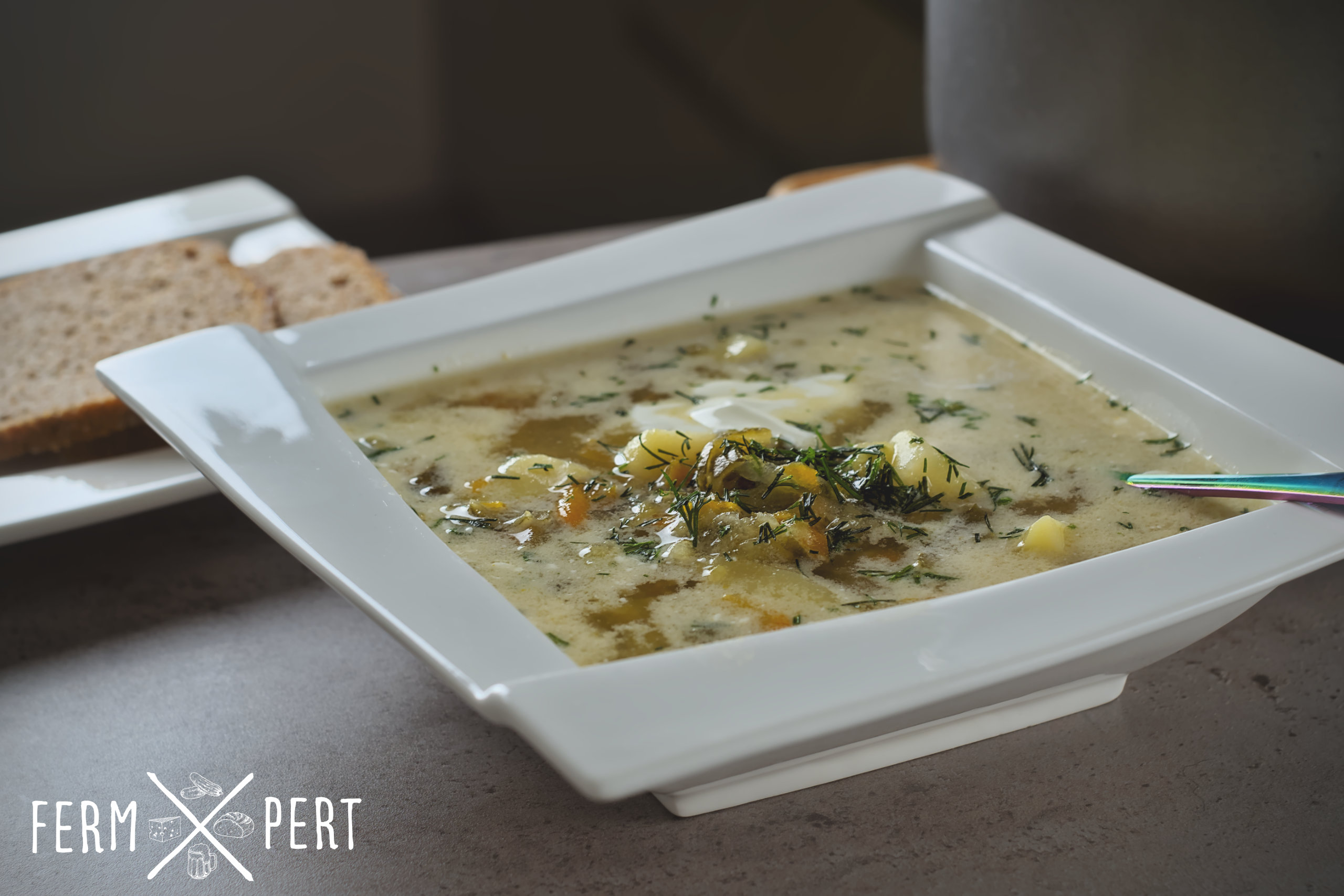 It’s one of my favourite soups. Sour, warming, but at the same time not too filling, so there’s always space for a second course. And above all, delicious. This is what sour gherkin soup is like.

Grathe the carrot and the gherkins, roughly dice the potatoes. Pour the broth into a pot and boil. Add the carrot, potatoes and sour gherkins, season with salt and pepper. Simmer until all vegetables become soft (around half an hour; the carrot requires the most cooking time so it can be added 10 minutes earlier). Finally, taste and adjust for salt if needed. Serve with sour cream mixed in.

Thesour gherkin sour can be prepared in multiple ways. The above recipe is possibly the simplest variant. I’ve come across a range of optional ingredients. One is the meat from the chicken used to make the broth. Another is barley groats. Both of these will make the soup more filling. A pinch of sugar, some lovage and dill may be added – these are used in the video. Sometimes, chopped spring onions are used. It’s also possible to go with fried finely chopped vegetables: onion, carrot, celeriac, leek. They’re used at the beginning of the simmer. Regular cream (ideally around 30% fat) can substitute sour cream. The soup can be thickened by mixing the cream with an egg yolk.

One of my childhood’s soups that I remember fondly is the sour gherkin soup. Even though it’s simple to prepare and it’s not particularly filling, its taste is delicious. The full recipe with the ingredient amounts can be found on the blog.

What’s your favourite soup? Let me know in the comments!

I start by peeling the potatoes. I also peel the carrot. I grate it. I roughly dice the potatoes. Finally, I grate the sour gherkins. They’re over a year old and they’ve already softened a bit, so I’m left with some hard to grate remains. I chop them with a knife.

I place a pot on the stove. I pour the broth in and turn the hob on. I also add a bit of dried lovage. It’s an optional ingredient. Carrot goes in. I heat the broth until it boils and add the potatoes. I also add freshly ground black pepper and salt.

After a while, I also add grated sour gherkins. I also sprinkle some sugar in. It’s another optional ingredient. Its role is to gently balance the sourness. I boil the soup again and continue simmering it until the potatoes and the carrot become soft.

Before serving, I taste the soup for salt and adjust if needed.

And I’m done. I like to add the cream when serving, though it can also be added to the pot. I stir a small amount of soup into the cream to prevent it from boiling and curdling. Finally, I also garnish the soup with chopped dill – frozen in my case since I didn’t have fresh dill at hand.

The aroma is out of this world. The taste is just as good. It’s complex. Sour, obviously, but mellowed out by the cream and with a clear umami undertone from the broth. It’s such a great soup.