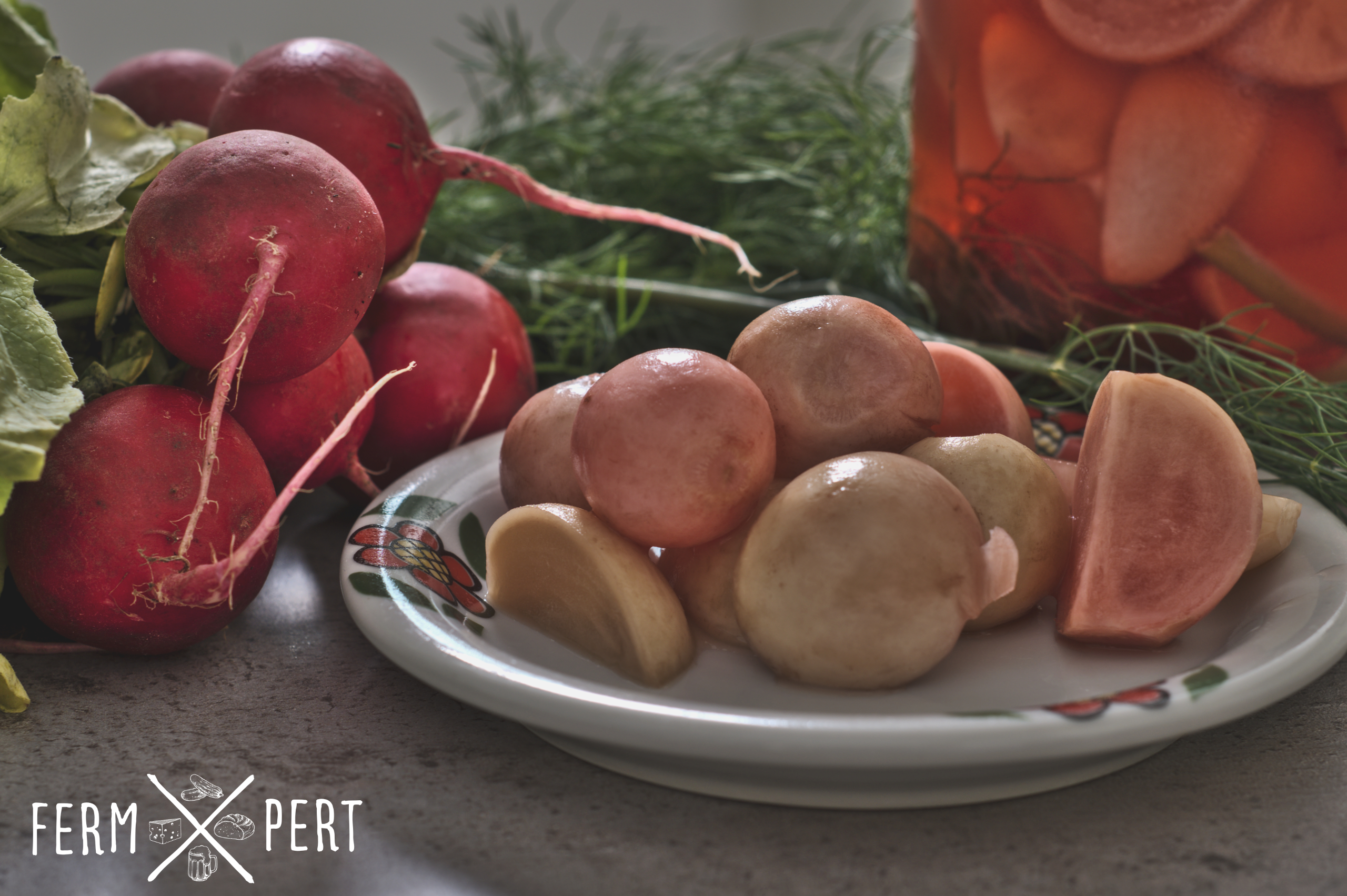 I usually eat radishes raw, but that’s not the only way. It can also be fermented. There’s plenty of ways to do it and the only mandatory ingredients are the radishes themselves and a salt brine.

The proportions given will be sufficient for three 540 mL or two 720 mL jars.

Wash radishes, remove roots and stems. Any radish variety will do and they can be mixed. They can be whole, sliced or cut in any way.

Place the optional ingredients on the jars’ bottoms. Don’t overdo it with garlic in order to prevent it from dominating the flavour; I reckon 1 clove per jar is sufficient. Other ingredients’ proportions are up to one’s taste.

Fill the jars with radishes. Pour brine over them and use fermentation weights to keep all ingredients submerged. Ferment for a week and refrigerate afterwards.

Red radishes quickly dye the brine bright pink. The brine also becomes cloudy from the lactic acid bacteria that thrive in it. This is normal.

The radishes themselves turn white. Their appearance may not be the most appetising, and so is their sulphury aroma, but they’re really tasty. They’re great for salads or as an addition to sandwiches.

Most hard vegetables can be fermented and radishes are no exception. However, it’s not the main ingredient that makes or breaks this ferment. It’s all about the additional things that go into the jar. The recipe along with additional information can be found on the blog.

What I’ve got here is a bowl of radishes. I’ve already washed them and removed the leaves. While some people leave the root and the bottom part of the leaves on, I find that it’s best to cut them off. I don’t want any dirt in my jars and cleaning these parts is the trickiest.

My radishes vary in size. Since I like them bite-sized, I will leave the smaller ones intact and quarter the larger ones. It’s also common to slice the radishes. The way they’re cut doesn’t make a lot of difference; it’s up to one’s preferences.

My additional ingredients include dill leaves, garlic, allspice and bay leaves. I will mix and match them to prepare three different versions. One will just contain radishes, with no extras. I distribute the dill between the other two jars. I add the allspice and bay leaves to one of them. The other gets a clove of garlic. I crush it so that it releases more flavour.

Now I put radishes into the jars. I distribute them evenly.

The brine comes next. I will only need salt and water. I add the measured amount of salt to my water, then stir until dissolved. I pour the brine into the jars so that all of the ingredients are covered. Fermentation weights will help keep the radishes submerged. This will cut off access to oxygen, preventing mould growth. I leave the lids slightly loose so that carbon dioxide can escape freely.

Now I wait. The radishes will sit undisturbed at room temperature. A week is plenty, though it turned out to be two weeks in my case.

The fermentation of radishes is similar to other vegetables. Lactic acid bacteria consume sugars, excreting lactic acid and carbon dioxide. What is interesting in this particular case is the pigment that gives radishes their distinct red colour. It’s an anthocyanidin, specifically, pelargonidin.

Here’s what the radishes look like prior to fermentation. And here are the same jars two weeks later. Pelargonidin is a pH indicator. It’s red in acidic solutions. It’s also water soluble, so it dissolves in the brine, leaving the radishes white.

I’ll start the tasting with the plain version. The radishes have a marked aroma, sometimes described as “farty”. This is due to sulphur compounds in them. I don’t pick up any off notes. The radishes are a bit springy due to the salty brine sucking some of the water out of their cells. The taste is uncomplicated, yet fairly pleasant. Perhaps not as a standalone snack, but I like plain fermented radishes as a side dish.

The dill and garlic version is more complex. The aroma’s “farty” quality is muted and barely noticeable. The taste matches it. It’s good, I really like this one.

Time for the third variety, with dill, bay leaves and allspice. The aroma is different, even more complex. So far so good. But what’s this? The radish should be springy, not soft and mushy. I manage to find one that’s firmer and the taste is fine, complex and pleasant. The texture of most other radishes in the jar is off though, indicating a problem. Perhaps an infection that hasn’t yet manifested itself visually.

That’s one failure out of three. Not the best result, but it sometimes happens. I’ll dispose of this ja and make a new batch. I’ll try not to let it sit on the counter for two weeks this time.