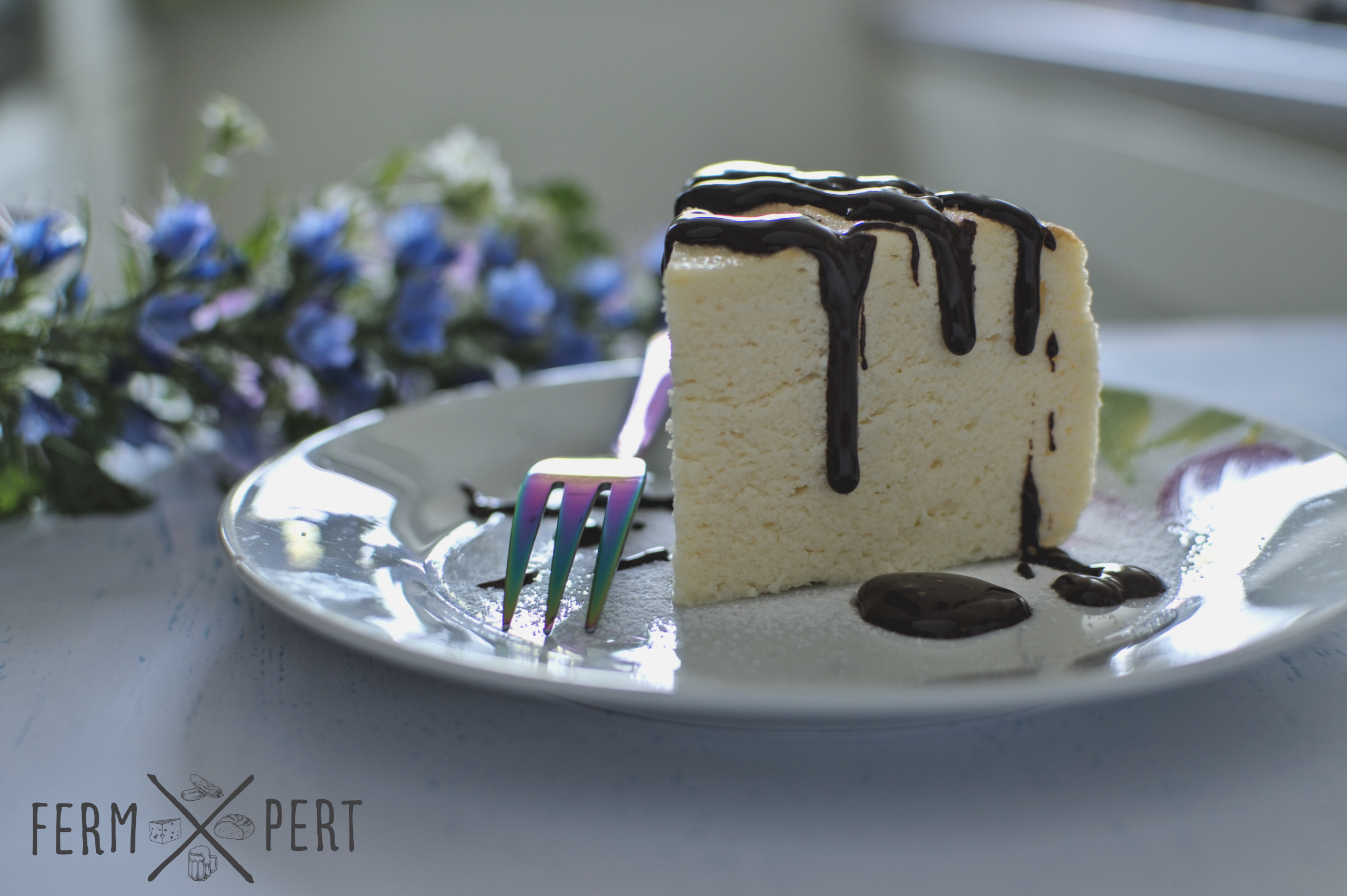 Fermentation is my thing, but I don’t feel as confident in confectionery. I can prepare but a few desserts, but when I make one, it needs to be exceptionally delicious. And the Viennese cheesecake is exactly that!

The following recipe uses example mass ratios for quark and butter, but every batch is a bit different. The necessary calculations can be found later in the post.

The proportions given are for a total of 500 g of quark and butter mixture. That’s a tiny cheesecake, about half the size of what most recipes call for. Information regarding scaling the recipe can also be found later in this post.

All ingredients should be removed from the fridge at least half an hour before using them so that they’re at ambient temperature.

Mix the soft butter with quark. Optionally, the butter may be creamed first, though there isn’t enough of it in this recipe to make a noticeable difference. There might be one if low fat quark was used though.

Separate the whites from the yolks. Mix the yolks with sugar and whisk until homogenised. Then add the mixture to the quark, poring it little by little and whisking constantly. Also whisk in the vanilla extract and flour.

Beat the whites until firm peaks are formed. Transfer to the bowl with the rest of the batter and fold it in using a spatula. Do not stir too vigorously or too long, lest the mixture becomes insufficiently aerated and the cheesecake turns out flat and dense.

Pour the batter into a round springform pan with a diameter of 18 cm. In the video, I used one with a smaller diameter, 16 cm, to get a smaller, but taller cheesecake. The suggested diameter will yield a wider, but shorter one.

Bake in a water bath at 160°C (320°F) for 30-35 minutes. The cheesecake is done when the top starts to caramelise. It’s possible to also tell if it’s ready by gently shaking the springform pan. The cheesecake should be completely set at the sides, but still a bit jiggly in the middle. Do not use a skewer to check the cheesecoke for donness; piercing a hole in it will likely make it crack in an ugly manner.

Remove the cheesecake from its pan only after it’s been chilled. This way there’s the least chance of damaging it.

150 g sugar per 500 g of quark may sound like a lot, but looks can be deceiving. This cheesecake definitely doesn’t belong to the overly sweet ones.

Wheat flour can be replaced with other type, e.g. potato starch. The idea is to add starch of any type to the batter. Thanks to this, the cheesecake will be pleasantly moist, but not soggy. This is because starch binds with water.

Vanilla extract can be replaced with two teaspoons of orange extract or a finely grated zest of half an orange. Also, raisins and candied orange peel are traditional additions to the batter. Personally though, I prefer my cheesecake without any dried fruit.

If a larger cheesecake is needed, the ingredient quantities can simply be doubled. Bear in mind that the springform pan diameter will need to be increased too (24 cm ideally, though many recipes suggest 26 cm; my opinion is that the larger pan yields a slightly too flat a cheesecake, though delicious nonetheless). Baking time will also increase, to around 45 minutes.

Calculating the exact quantities of quark and butter can be a bit of a pain, but I think it’s worth the effort. 25% fat content is ideal and keeping it spot on will consistently result in great cheesecakes every time.

The calculators, as well as details regarding the used formulae, are available in this blog post.

Another (hacky) way would be to use fat free quark (by making it from skim milk). In order to reach 25% fat content, and assuming butter always contains 82% fat, the ratios are constant and require no calculations: 347 g of quark and 153 g of butter.

I don’t often bake cakes, but there’s one type I’m particularly fond of: the Viennese cheesecake. It’s a variety made entirely from quark-based batter, with no base. It’s so delicious that I don’t even mind the relative difficulty of the recipe. Which, along with additional information, can be found on the blog.

To make the batter, I will obviously need quark. Homemade in my case, though store bought will work fine too. The remaining ingredients are eggs, caster sugar, flour, butter and vanilla extract. All ingredients must be at ambient temperature.

The amount of butter depends on the fat content of quark. The goal is to bump it to exactly 25%. This is the sweet spot for cheesecakes and it results in a perfect texture. The blog post contains more information on how to calculate the ingredient amounts precisely.

The butter is soft and I can slightly cream it using a whisk. This is hard work and to be fair, I think it’s not crucial in this recipe.

I set the whites aside and add caster sugar to the yolks. I whisk the mixture until everything comes together.

I should beat the whites much later, but for some reason I started early. I realise this after a while and leave the whites half beaten. I’ll come back to them in a while.

The actual next step is combining quark with the butter. However, freshly made quark is too grainy. A cheesecake requires a very smooth cheese, so it needs to be ground. A typical way of doing this would be to use a meat grinder or possibly a blender. I prefer a potato press. The result is the same and there’s less cleaning afterwards.

Once the quark is ground, I combine it with butter using a whisk.

Yolks with sugar come next. I add them little by little, whisking the mixture constantly.

The batter is smooth and homogenous. I still need to whisk in the vanilla extract and the flour.

Everything’s in place except the whites. It’s time to finish beating them. I know I’m done when I see firm peaks forming when I lift the whisk. The foam should stay in the bowl even when turned upside down.

Now I combine the whites with the batter. I don’t use a whisk, but instead I fold the foam in with a spatula. This step requires a gentle approach in order not to knock the air out of the whites. The air bubbles act as the only leavening agent here and I don’t want the cheesecake to turn into a cheese pancake.

I have a round springform pan prepared. I’ve lined it with parchment paper. I pour the batter in and gently even the surface out. Now comes a neat trick. I’m going to bake the cheesecake in a water bath. For that, I will need some aluminium foil and a larger vessel, a large cake tin in my case, but a deep roasting pan would do fine too. I wrap a double layer of aluminium foil around the springform pan. This must be water tight, so there must be no holes in the foil. I then place the springform pan in the larger vessel, which I then fill with boiling water. The water level should reach approximately half the height of the inner pan. This contraption makes sure the batter never gets burned. Only the top of the cheesecake will be directly exposed to the oven’s high temperature. The water vapour will also minimise the risk of the cheesecake’s surface cracking. Oops, the outer pan is already too hot to handle. I need some kitchen gloves.

The cheesecake is ready when the top starts to caramelise. It’s risen nicely, though it always deflates a bit afterwards. I remove the springform pan from the water and also remove the aluminium foil. The pan goes back into the turned off oven. I don’t shut the oven door completely. The cheesecake will slowly cool down while still cooking in the centre over the next 30 minutes.

Half an hour later, it’s safe to remove the cheesecake from the oven and let it cool down to ambient temperature. When it’s cooled down, I place it in the fridge. It needs an overnight chill to develop the optimal taste.

On the next day I can take the cheesecake out of the fridge. I remove it from its springform pan and cut two portions. I like to serve them with a dusting of confectioner’s sugar and a bit of chocolate ganache. White, dark or even both!

Oh, this is so good! It’s sweet, but not overly so. The quark comes through and the texture is just perfect. The cheesecake is smooth and moist. Delicious!