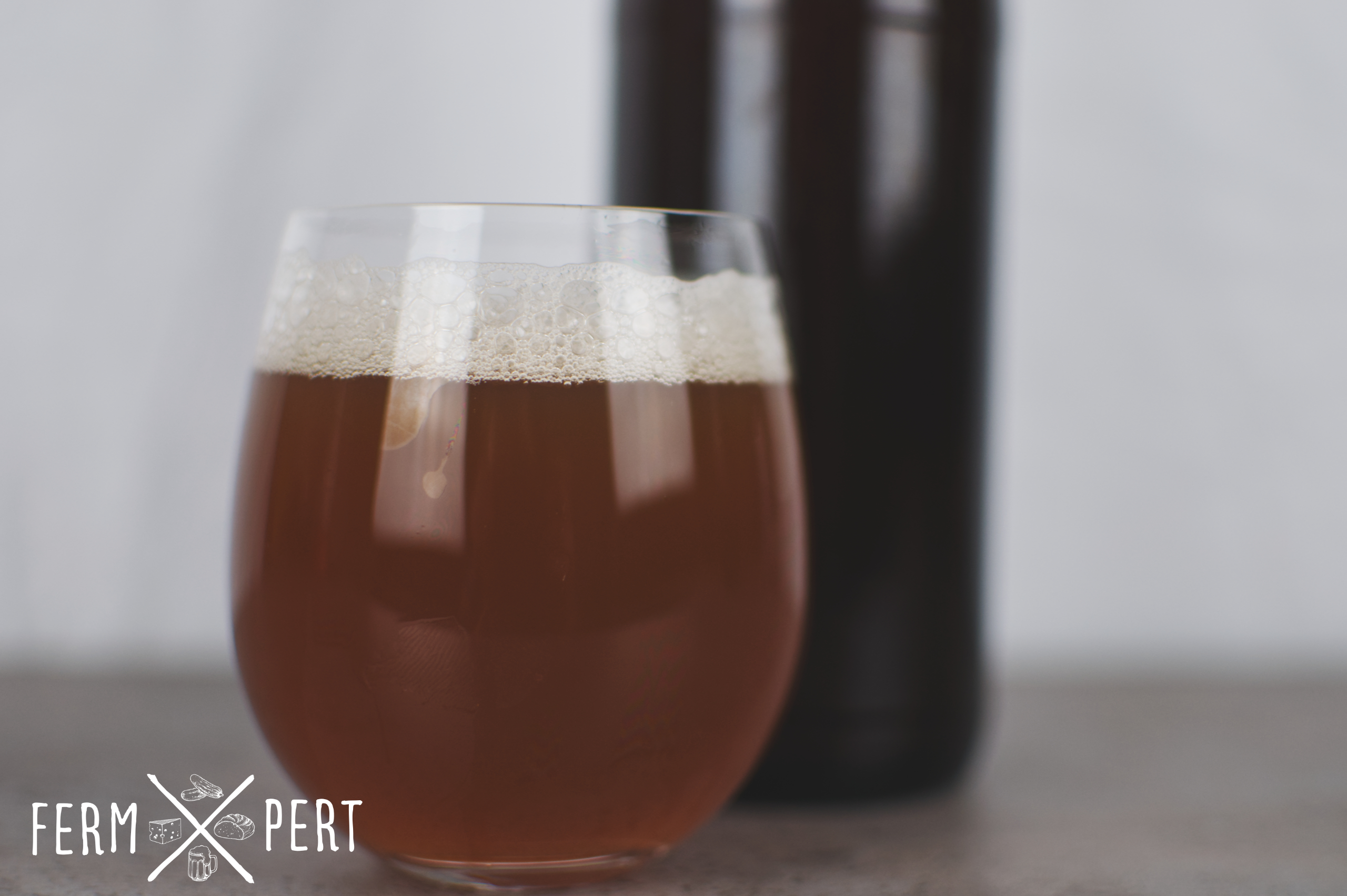 I was born in a socialist Poland of the early 1980’s. One typical aspect of that era was the relative unavailability of imported goods. Of course I, as a youngster, wasn’t exactly interested in luxuries and was overjoyed to be able to have a sip of a sweet soda. There was a substitute though. A home made soda that was popular in Poland and Lithuania, podpiwek, didn’t exactly emulate the foreign fizzy drinks, but rather created a category of its own. Its popularity waned over time, but podpiwek was never forgotten. Here’s how I make it.

Ingredients for 5 litres of podpiwek.

Boil 2 L of water. To the boiling water, add grain coffee and stir until the foam disappears. Add sugar and stir until dissolved. Total boiling time should be given on the grain coffee’s packaging. Dissolve the yeast in a bit of water and set aside.

5 minutes before the end of the boil, add hops and stir it in.

After removing the pot from the stove, strain the liquid through a cloth filter (gauze or cotton flat nappies work great). Add the remaining 3 L of cold water. Add the dissolved yeast.

Pour the podpiwek into clean flip top bottles, leaving a bit of head space. Ferment for 2-3 days, checking the carbonation level periodically. When the beverage is carbonated, move the bottles to the fridge and consume within 1-2 weeks.

The fermentation is still somewhat active even in the cold. Therefore, the drink will get more carbonated over time, which can eventually lead to the bottles exploding.

The hop variety plays little to no role. There’s no point in investing in expensive, imported varieties. Whether it’s Magnum, Cascade, Fuggle or Saaz, it’s all good. The latter two are low in alpha acids, so a slightly larger dose might be needed.

When I was an adolescent, I used to drink podpiwek in the Summer. My aunt used to prepare it from easily obtainable ingredient kits. It is a carbonated soft drink. It used to be popular in Poland until the late 80s as an alternative to sweetened fizzy drinks, which were generally difficult to obtain during the socialist period of our history.

Podpiwek is made from five base ingredients: water, grain coffee, sugar, hops and yeast. Pre-made dry ingredient mixes are commercially available, but I prefer to buy each one separately. Exact ingredient amounts can be found in the related blog post.

Grain coffee provides the base of the flavour and colour. It is a mix of roasted chicory root, rye and barley, though the exact composition of grain coffee can vary between brands. Some add roasted sugar beets, others just use chicory or use alternative, less common cereals, such as spelt.

It matters little what sugar is used, whether it’s white or dark, beet, palm, cane or coconut. All that matters is that it’s fermentable, or possible to digest by the yeast cells. Stevia, xylitol or erythritol will not work.

The hops, which were missing in the opening shot, usually take the form of pellets. They’re easier to obtain than cones, at least where I live, and they do not differ in quality. Hops introduce a pleasant aroma and a bitter flavour.

The type of yeast can also vary. I use fresh baker’s yeast, but brewer’s yeast works just as well. There’s only a tiny amount, and even less is needed if using dried yeast. This is perfectly enough to carbonate the drink though. Too much yeast will unnecessarily speed up the fermentation.

I pour 2/5 of the total volume of water into a pot and set it to boil.

As soon as the water starts to boil, I add the grain coffee and begin stirring. Grain coffee contains some carbon dioxide that is trapped within. It’s solubility in boiling water is low, so it is released and tends to foam up. It can even cause a boilover. This lasts only a minute or two, after which the carbon dioxide is fully released. The foam disappears then and it’s no longer necessary to stir.

I add sugar during the boil so it dissolves easier in hot liquid. I stir for a while to prevent the sugar from burning on the bottom of the pot.

Total boiling time is 15 minutes, at least according to the instructions on my grain coffee’s package. The idea is to extract as much flavour as possible.

Five minutes before the end of the boil I add my hops. The amount of hops, the boil time, as well as the amount of alpha acids influence the bitterness level in the finished product. This is due to the isomerisation of alpha acids, which occurs gradually in temperatures over 80°C or 176°F, creating bitter iso-alpha acids. Bitterness control is a matter of personal preference, but it’s easy to overdo it. My personal choice is 1 gram of hops per litre of beverage, at least assuming an alpha acid content of 5-8%. At higher levels, I prefer to reduce the amount of hops.

While the liquid is boiling, I dissolve the yeast in some cool water. I’ll be adding it later, when the podpiwek is cooled down. The yeast is very vulnerable to heat and would get cooked if tossed into hot liquid.

After the boil I filter out the grain coffee and hop debris. My filter is a piece of gauze, although I typically use a cotton flat nappy. Since the grounds clog the filter, I move the gauze around and, if needed, remove excess grounds with a spoon.

I cool down the filtered podpiwek with the remaining 3/5 of cold water. This is much quicker and less wasteful than putting the pot in an ice bath or simply waiting until it cools off by itself. I also add the yeast and evenly disperse it by giving the liquid a good stir. Some recipes suggest adding some lemon juice at this point for some extra flavour complexity.

Next, I pour the podpiwek into a jug. It’s not a requirement, but I find it easier to use a jug instead of a ladle. My funnel was slightly too large for the bottles, but fortunately I managed to make only minimal mess.

I pour the liquid, leaving a bit of head space. I close the flip tops and let the podpiwek ferment for 2-3 days. During this time, the yeast metabolyses the sugar, producing ethanol and carbon dioxide. The latter compound will dissolve in the liquid, making it fizzy. However, I mustn’t leave the bottles unattended for too long. There’s plenty sugar to produce enough carbon dioxide to explode the bottles. I check the carbonation level periodically and as soon as I think it’s sufficient, I transfer the bottles to the fridge. The low temperature brings further fermentation nearly to a halt. The beverage can safely stay in the cold for a few days, often a week or more, before overcarbonation becomes apparent. The alcohol level at this stage does not exceed 0.5% ABV.

There are recipes that suggest adding a few raisins to each bottle, however, I don’t do that. Raisins neither provide a noticeable flavour change, nor bring in measurable amounts of nutrients for the yeast. However, they are a nucleation site for carbon dioxide, making the drink gush out of the bottle when opened.

The finished podpiwek should have a pleasant, balanced flavour. There’s a light sweetness from the remaining unfermented sugar on one side, some hoppy bitterness on the other, a roasty background and a light yeasty note. It tastes great when chilled, it’s refreshing and it’s got less sugar than most commercial sodas. Still, it’s far from calorie free, so moderation is nonetheless advised.

It might also be a good idea to experiment with additives. During the boil, spices, orange zest, cacao nibs or alternative sugars like maple syrup, molasses or honey can be added. After cooling, an extra bit of orange or cherry juice could go a long way. Podpiwek does not need to be boring!